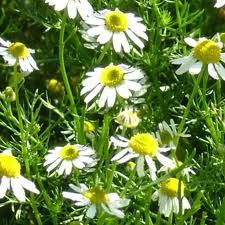 In Ancient Egypt, chamomile was dedicated to the sun God Ra. Chamomile was one of the 9 sacred herbs of the Saxons. In addition to helping people, the plant has also been used to cure sick plants and was known as the plant’s physician.

Constituents include flavonoids, bitter glycoside, coumarin, malic acid, tannins. The azulenes and bisabolol are anti-inflammatory and antispasmodic. They will reduce histamine-induced reactions such as anaphylaxis, hay fever, allergic asthma and eczema. Spiroether is also strongly anti-spasmodic.

Unsurpassed as a digestive remedy in nervous dyspepsia, peptic ulcers, gastritis (bisabolol has been shown to speed up the healing of ulcers both externally and internally), IBS, gastro-enteritis, diarrhoea; in fact there is hardly any digestive problem where chamomile would not be helpful.

Although a carminative, chamomile has an appreciable bitter action too, ensuring adequate bile flow. This produces an overall very balanced action ensuring that digestive ‘depression’ does not occur.

Chamomile water as an external agent is indicated for any inflamed, irritated skin condition such as eczema, urticaria, acne rosacea, acne vulgaris, and varicose ulcers. It may also be used as an inhalation for catarrh, sinusitis and hay fever where its actions are much more anti-inflammatory and less irritant on the mucous membranes than eucalyptus for example.

The anti-allergy properties of chamomile water make it a key treatment internally for allergic conditions such as, asthma, eczema or hay fever. It is also a diaphoretic making it useful in colds and upper respiratory tract infections.  As with other volatile oil containing plants, constituents in chamomile are excreted via the kidneys, making it useful as a gentle urinary remedy.

The generic name of  Matricaria is derived from matrix, meaning mother or womb, underlining the early prominence given to the plant for female reproductive problems. It is useful in morning sickness and vomiting in pregnancy, some menopausal symptoms, premenstrual headaches and migraines, amenorrhoea of nervous origin, painful periods, mastitis, and PMS.

All in all, this is a highly useful aromatic water that should be in everyone’s (human & animal) first aid kit.