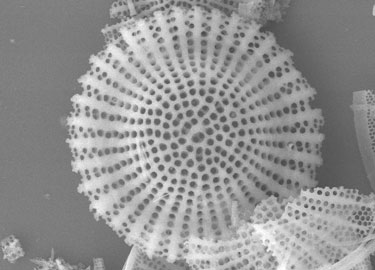 Although in Applied Zoopharmacognosy we simply offer and allow the animal to choose or refuse rather than adding to feed, the fact that the product has been approved as a feed additive means it is perfectly safe to offer to your animal.

It also works well on its own or mixed with neem leaf powder and/or green clay as an insect repellent.

DE – by DE-sign of nature will:

and is suitable to use on and to  offer to all animals – horses, cattle, dogs, cats, sheep, poultry etc and their housing. Can also be used in grain stores & greenhouses (Soil Association permitted for organic use) to deter insect pests.

Safe around animals and in water run off for river and stream life. Can be offered to all livestock and domestic pets regularly.

In spite of the immense variations in shape and size, each diatom species has two things in common, chemically the same silica shell and physically an intricate perforated structure. It is the myriad of interconnected pores and generally hard, irregular structure that is important to the functionality of this remarkable earth.

Although silica is a common feature in the Earth’s crust, very little is dissolved in the lakes and oceans. Diatomite represents a very rare occurrence– a mineral silica (amorphous silicon dioxide) worked by nature into a labyrinth of tiny holes. No other silica source that is mined or chemically prepared has such a structure. It is a work of art by Mother Nature, but the key to the exceptional properties of diatomite lies more in the microstructure– each diatom being peppered with thousands of holes, usually of three distinct sizes, ranging from a few microns down to sub microns. The number and sizes of the holes vary with the species and species predominance in diatomite deposits can affect its oil absorption and other physical properties, making some DE better than others at insect control. Diature™ and DETER have proven superior oil absorbancy properties and an exceptionally high surface area.

The key to high quality diatomaceous earth products is simply to ensure that the diatomite rock being mined is of sufficient purity and free from clays and other minerals.

What is Diatomaceous Earth – DE?

DE is a very fine powder created from the shells of millions of microscopic creatures called diatoms. Diatoms absorb silicates from the water to create the shells. When they die they sink to the sea bed. Over time sea levels change and layers of DE are exposed and mined.

How does DE work?

DE kills mites, ticks, fleas etc by absorbing the waxy layer which these creatures produce on their outer layers.  It is effective against red mite in poultry houses.

How it works within the gut of livestock is not yet understood, as not only does it help feed conversion it is also able to effect the destruction of younger and smaller intestinal parasites and thus reduce the worm burden in animals, giving them a chance to develop their own immunity. It may be something to do with the high dependency of nematode parasites on lipids in the gut of the infested host, as DE has an affinity for these lipids and may be removing them from the gut. It has also been reported to help prevent the development of parasite larvae in faecal droppings on the pasture. There has been much anecdotal evidence of its efficacy in many species.