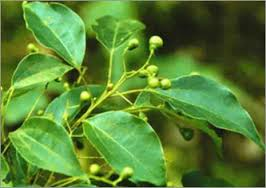 Ravintsara is the essential oil steam-distilled from the leaves of cinnamomum camphora and is high in 1.8 cineole – often confused with  ravensara (ravensara aromatica), which is high in methylchavicol (estragole), sabinene, alpha-terpinene, limonene, but contains very little 1.8 cineole.
There has been (and still is) much confusion over these two oils, probably initially caused by the fact that ravensara is a latinisation of the Malagasy word ravintsara and was the name generally given to the oils distilled from either ravensara aromatica or cinnamonum camphora.  Furthermore, as is the case with all essential oils to a greater or lesser degree, their constituents can vary considerably according to where the source plant or tree is growing; for example cinnamomum camphora grown in Taiwan and Japan is known as Formosan Ho Oil, Ho Oil Taiwan or Japanese Ho Oil and has linalool as its major constituent but in India and Sri Lanka the camphor type remains the most important.
This ravintsara essential oil is organically grown in Madagascar – however ravintsara is not indigenous to Madagascar, it was introduced from China to Madagascar in the early 1800s.  It is a species of cinnamonum camphora which has lost its ability to produce any camphor under the Madagascan climate (ironically cinnamonum camphora is commonly known as Camphor Tree or Camphor Laurel in China, Japan & Australia).  The essential oil contains a high level of cineole 1.8 (45 to 55%) (whilst ravensara aromatica contains very little) and monoterpenes.

Ravintsara makes the ideal oil to offer when there are coughs, colds, influenza and other respiratory ailments such as asthma, bronchitis, sinusitis, laryngitis, tonsillitis and otitis. It acts as a tonic in cases of lethargy or congestion with white or clear catarrh. It is also considered to be less likely to irritate skin than ravensara.

Also selected for tissue repair in cases of  herpes, verrucas, warts and athletes foot (although for shingles in humans, ravensara  in cold-pressed calophyllum oil, would be the oil of choice).

We stock Ravensara essential oil too; which, due to its excellent decongestant properties, is very beneficial for upper respiratory issues, especially where phlegm or catarrh is present.