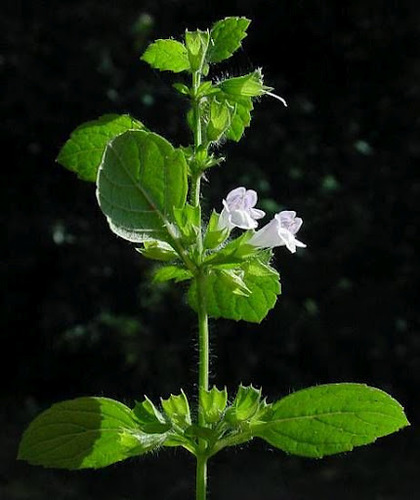 This lovely aromatic water distilled from organic lemon balm flowering tops & leaves is very useful in animal & human applications; although similar in effect to the essential oil, the distilled aromatic waters have a much gentler action and can be used in a sprayer.  Melissa is an excellent digestive aid, immune stimulant & anti-viral – effective against herpes.

The name Melissa is derived from the Greek ‘melittena’ or ‘honey bee’, because, as Dioscorides noted, ‘bees do delight in the herb’. Beekeepers still rub their hives with the plant, knowing that their bees will never leave and hoping that other bees will come. The plant is native to the eastern Mediterranean, and the Arabs were the first to extol its virtues. The Romans introduced the plant to Britain. Both Dioscorides and Pliny noted the plant’s analgesic, antispasmodic and vulnerary properties.

Melissa has an ancient reputation for easing cardiac and nervous disorders, and above all, for counteracting melancholy. It was widely considered to promote longevity. John Evelyn (1620-1706) said; ‘Balm is sovereign for the brain, strengthening memory and powerfully chasing away melancholy’, and Paracelsus (1493-1541) called it ’The Elixir of Life’. Thomas Coghan, a 16th Century Oxford Don, said ‘It is an hearbe greatly to be esteemed of students, for by a special property it driveth away heaviness of mind, sharpeneth the understanding and encreaseth memory’.  In the 17th century the Carmelite monks in Paris made a distillation of balm leaves called ‘Carmelite water’ which also included lemon peel, nutmeg and angelica root and was used as a perfume.

The volatile oil, in particular the constituents citral and citronellal, is responsible for the plant’s calming effect on the limbic system within the brain, and for its anti-spasmodic action. The water-soluble polyphenols are anti-viral and these constituents are present in the AW, but not the EO.

This distilled aromatic water has a light, sweet fragrance and is very refreshing & uplifting.  It is not as strong an immune stimulant as melissa EO, but still useful in that regard.

It is helpful to calm nerves, being relaxing without any sedative effect.  In humans it can reduce hyperactivity and increase focus and is used successfully in cases of ADHD.

It is also a really good remedy for herpes and an excellent aid to digestion.