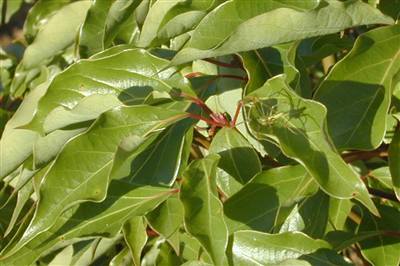 Also known as agatophyllum aromaticum (the oil produced from the steam-distilled leaves is called ‘ravensara aromatica‘ and the oil produced from the bark is ‘ravensara anisata‘); the tree is a member of the Laurel family (the leaf has similarities with Bay leaf (bay laurel). In the hope of not confusing further, ravintsara is the essential oil steam-distilled from the leaves of cinnamomum camphora and is high in 1.8 cineole whereas ravensara aromatica is high in methylchavicol (estragole), sabinene, alpha-terpinene, limonene, but contains very little 1.8 cineole.
There has been (and still is) much confusion over these two oils, probably initially caused by the fact that ravensara is a latinisation of the Malagasy word ravintsara and was the name generally given to the oils distilled from either ravensara aromatica or cinnamonum camphora.  Furthermore, as is the case with all essential oils to a greater or lesser degree, their constituents can vary considerably according to where the source plant or tree is growing; for example cinnamomum camphora grown in Taiwan and Japan is known as Formosan Ho Oil, Ho Oil Taiwan or Japanese Ho Oil and has linalool as its major constituent but in India and Sri Lanka the camphor type remains the most important.

Ravensara is a useful oil (obtained by steam distillation of the leaves of agatophyllum aromaticum / ravensara aromatica)  being strongly antiviral and is also recognized as a general tonic and an anti-stress remedy. In addition it is considered effective for detoxification and digestive complaints as well as stress. Ravensara is particularly efficient at treating all forms of herpes and soothes inflammation caused by shingles in the human animal.

We also stock ravintsara essential oil; which, due to its excellent decongestant properties, is very beneficial for upper respiratory issues, especially where phlegm or catarrh is present. It is also considered to be less likely to irritate skin than ravensara.