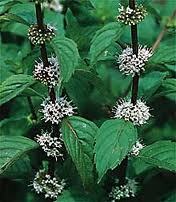 Peppermint is renowned for its refreshing and cooling effect, as well as its beneficial effect on digestion.  It is also an effective painkiller and horses will often ingest the aromatic water or the essential oil (EO) and/or ask for it to be applied topically to painful areas.

It is useful too in cases of heat stroke as it offers beneficial cooling on a physical level.

According to hieroglyphics found in the temple of Edfu, mint was used by the Ancient Egyptians as a ritual perfume and was the ingredient of the sacred incense ‘kyphi’. In Ancient Greece, athletes rubbed it into their bodies before competitions and the Arabs have drunk it for centuries to stimulate their virility.

Both the Romans and Greeks used it to perfume their bodies and bathwater, and felt that it stimulated clear thoughts, concentration and inspiration. Pliny declared that ‘the very smell of it alone recovers and refreshes the spirits just as the taste excites the appetite’.

The essential oil was used as early as the 14th century to whiten teeth and later to mask the smell of tobacco. Peppermint only really became popular in Western Europe in the 18th Century, despite its ancient origins.